Memory-Continuity
Saturday, May 7, the Roosevelt Island Visual Art Association opened a new exhibit in its main gallery at 527 Main Street. The collection of 60 works by Romanian Father and Daughter Marin and Alina Gherasim marks the second time in less than a month that RIVAA delivers top of the line European artists to Roosevelt Island. (See photo gallery below)

Previously, on April 26, in alliance with RIVAA, Roosevelt Island Operating Corp. Acting President Susan Rosenthal unveiled Ulla and Gustav Kraitz’s sculpture Blue Dragon at its permanent home in Southpoint Park. The sculptors traveled here from Sweden for the unveiling, and this weekend, Alina Gherasim came to Roosevelt Island from her home in Romania.

Her father Marin addressed the crowded gallery in a short film.

The exhibit, which runs until May 29, is a special presentation sponsored by the Romanian Cultural Institute of New York.

Father and Daughter Artists
A member of the Romanian Artists’ Union since 1966, Marin Gherasim has been the group’s honorary president since 2012. His lifetime achievements in painting have been supplemented with his work as historian and teacher at the Institute of Art History of the Romanian Academy.

20 of his paintings appear in this show. A precise craftsman, the elder Gherasim’s pictures stem from the idea of “equating construction with the architecture of spirit.” Their careful designs reminded me of Paul Klee’s geometrically aligned images, except that Klee’s paintings were largely figurative while Gherasim’s are pure abstractions.

His twenty paintings represent expressions of the otherwise invisible soul and are meant to make spirit known through the use of “imagined geometries.”

My favorite from this show is Niche at Catacomb, a canvas passionately fired with spirited reds with just enough perimeter canvas showing to suggested an uncertain border. If any painting ever came from the heart, this one did.

Alina Gherasim is a different stylist than her father. Although she also deals with spiritual matters, she shows an airier touch, less dense and infused with an essence of play. In fact, when I asked about her use of materials in her collages and rephrased what she told me as “whatever works,” she smiled and responded, “like a Woody Allen movie.”

Her creations are of a brighter spirit than that of the legendary American filmmaker, but that doesn’t mean they are less serious.

Ms. Gherasim tackles abstract portraits of Da Vinci, Vermeer, Titian and Rembrandt as if they weren’t unapproachable masters but companions of spirit. The portraits are made from paper, some of it painted before joining the collage, some of it after, spices and more around a central image from the subject’s art. The lyrical results suggest artistic sensibilities coalescing in the act of creation.

Among her 40 works in this show are others of less familiar subjects and an engrossing group illustrating the souls of people with names unlikely to be known to many of us.

An Exhibit That Almost Wasn’t
“We couldn’t have done this without all the help from local people,” said Eduard Andrei, Programs Manager at the Romanian Cultural Institute and the point person for putting the exhibit together.

Instead of days to mount the show, they had to hang it in a period of hours since much of it arrived in New York far later than expected.

Valeriu Boborelu and the experienced team at RIVAA pulled all their resources together to put up a show that looks as finished as any previous one at the gallery.

Once again, we have a chance to appreciate the strength, connections and exuberance of our Roosevelt Island artists’ collective and its ability to deliver world class art, free of charge to our community. 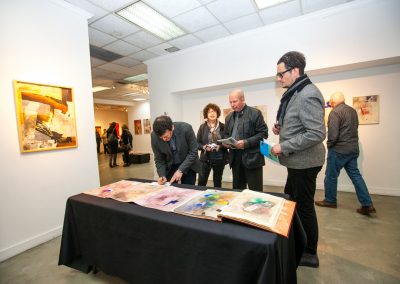